Towards the end of 2019 I’ve found it hard to write up my thoughts about Venezuela’s current situation in a new, fresh manner because quite frankly, nothing has changed. The past months have been a lull and stagnant period in the country after what was a very heated and convoluted start of the year.

It has been ten months since the start of our latest political crisis, one that exploded with a full bang when Juan Guaido, in his capacity as President of the National Assembly, enacted article 233 of our Constitution and assumed the interim presidency of Venezuela. A bold move, all in all, one that counted with an astounding amount of international support. Three concise goals were presented to us back then: The ceasing of Maduro’s usurpation of power, a transitional government, and free elections.

These actions reinvigorated the expired and wearied Venezuelan opposition. At the time, it renewed the hopes for some—others, myself included, were cautiously optimistic up to a certain point, willing to give the benefit of the doubt after years of failures because it was the hand that we had been dealt.

A lot happened since then in this country but nothing has really changed for the better—in fact, things have simply worsened all across the board, and the three promised goals? Hah!

While I’m not a smart person nor a political mastermind, the one thing I feared that would happen happened: The opposition once again failed to produce effective results beyond securing their interests in this, perpetual status quo. As such, most of the faith and trust they had recovered vanished over the course of the year, which they only have themselves to blame.

Another thunderous and unmitigated flop from the usual suspects, who, may I remind you, are mostly comprised of political parties that are ideologically center-left at best. Regrettably, keeping things as-is is good business for certain spheres of power in this country, that has been the case all along.

When the only result of their actions (or lack thereof) is that the regime gets some breathing room and buys time, adapting, and further cementing themselves in power surrounded by the rumination they wrought upon by this, Bolivarian Socialism, then you need to seriously consider who’s benefiting who.

Like any heroic epic tale of yore, a hero is nothing without the villain. The regime and the MUD need one another for their continued existence, a Bellerophon and a Chimera—roles that are interchangeable depending on the allegiance of who you ask.

A sector of the opposition is now adamant on pushing the idea and possibility of free* elections in an incestuous deal with the government—which goes against what was originally promised to the country at the start of the year. It is the same sickening “As long as I get some crumbs of the political power cake” mentality of the politicians that first threw us citizens into this tragedy.

Meanwhile, the core issues that plague this country haven’t been addressed in the slightest, health, economy, food, the well-being of our people, education, the continuous cultural and societal decay, et al. All those horrific tales you’ve heard over the past years are still there, just with slight variations, while some have been simply masked with different coats of painting—turning a blind eye to the core problem.

Certain restrictions have been lifted and as a result, the availability of products has improved, but without addressing the behemoth known as hyperinflation and the obliteration of our currency, it becomes a moot point, as large sectors of the population still can’t afford basic sustenance—but hey, some stores have imported Nutella, man, Nu-te-lla, that totally means that things have improved, right?

So, with nothing really solved at its core it shouldn’t come as a surprise that a growing percentage of the population are tired of being lied to, tired of being sold hope by these opposition politicians that do not end up keeping their end of the bargain. Tired of not receiving solutions to their problems but stuck in a locked political game with actors adamant in preventing any possible third party disruption to their standstill, not letting that much needed third alternative rise and join the fold—in whichever form it’ll end up taking.

In one hand, you still have a very repressive and authoritarian socialist regime, armed to the teeth and aided by the likes of China and Russia. The Socialist Party is willing to do anything and everything to stay in power—and after twenty years I’m afraid that they’ve become exceedingly good at it.

At the other hand you have the pastiche known as the opposition, whose leadership follow agendas of their own, and benefit from the position they’ve seize for themselves. As both sides actively conspire to keep the conflict locked as-is.

Once more, with feeling.

In an effort to renew some of the lost faith and trust, the opposition, spearheaded by Guaido, announced a new round of protests and rallies that began on the 16th of November. In my personal opinion, these started off with the wrong foot from the moment and manner in which they were announced: one month in advance; as if they were calling for some sort of entertainment event instead of a metaphorical call to arms against the socialist regime. As if the country, desperate for immediate action and solutions given the dire state of things, can afford to pre-program these types of events like some sort of convention—as if people are suddenly not going to need food and meds for one month.

Still, the call was heard by some, not in the same numbers as earlier this year, mind you, but heard nonetheless. Whatever lapses in turnout happened are not to be blamed on the citizens, who after twenty whole years of the same cycles, are exhausted and tired of the false promises. 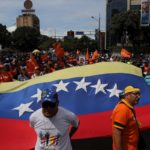 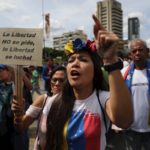 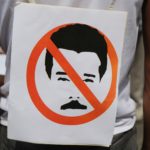 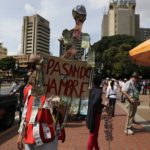 The call for Calle sin Retorno (Street without Return) ended in the afternoon with a march towards the Embassy of Bolivia, and that was it.

Sign our anthem, then pack it up, show’s over, go home.

It was yet another run of the mill Venezuelan opposition rallied, with the now accustomed selective block in social media during the speeches, reports of tear gas and repression in some stats, and the regime’s counter-march.

In shot, it was the same thing that we’ve grown accustomed to—and then along came Carlos Caballero.

In a video that went viral, this man speaks words that embody the growing apathy and disdain for not just the regime (they do that on their own), but the perpetually failing opposition, their lack of answers, and incessant incestuous political compromises with the regime, all whilst filling their pockets—because being the opposition to this regime is in fact, good business.

His words and actions got him booed by an opposition crowd, his “Guaido [is a] fraudster” sign taken from him, and he was chased out of the rally. He was immediately branded as a (former) Chavista, even if true, the man’s past is irrelevant and does not invalidate his opinions in this matter. Quite frankly, he’s right.

As I’ve said in the past through social media, you cannot criticize the opposition or even demand a grain of accountability from these people, or you will be branded as a Chavista, Cuban G2 agent, and all other sorts of epithets—mirroring the experience that you’d receive if you were to do it to the regime, just coated in blue instead of red.

These politicians demand your blind trust, your blind allegiance, and eternal patience without providing you with real results, all whilst everything continues to decay and collapse around you—just don’t you dare ask for accountability and that they uphold their promises.

At some point one needs to start asking itself, what have they done for the betterment of the country?

At least with the regime you know that all of their actions go towards one goal: to keep perpetuating themselves in power using the full extent of their force and ideology to continue subjugating the country just like the Castros in Cuba—even if it means selling their soul (and what’s left of the country) to Russia, China, Turkey, et al.

If you ask my personal opinion as a citizen of this country—a pariah that has lived an atypical life that was turned upside down by the utter collapse of this socialist system that has befallen upon Venezuela, then I will tell you the truth: I’m just exhausted of the entire political caste, twenty years of the same nonsense, watching how every year things are worse than the one before. All the time, loved ones, resources, independence, sovereignty, and everything else that that we’ve lost in this, perverse political game, leaving us with a husk of a country torn apart by a socialist regime, and a left/center-left opposition.

I’m utterly nauseated of the endless cat and mouse game, between the regime and the opposition, their never ending cycle, and every other metaphor you can use to describe them.

Yes, I just want to grill.

Had it not been for the fact that I’m stranded due to a lack of a work visa or any other legal form of migration that allows me and my brother entryway into a new country then that amount of 4.5 million Venezuelans that have fled the country would have two more: my brother and myself. I’m adamant in making things the right and legal way, despite not being the most studied person out there (I only got myself to blame for that), it certainly hasn’t been easy, but it is what it is—plus, legally getting my brother outta here has been a daunting task so far.

More protests have been scheduled for this week, across varied locales. Call me pessimistic if you must but it all poses to be more of the same ineffective opposition tactics, protests with a pre-defined date and time, few ‘inspiring’ words by Guaido, the regime’s media machine doing it’s thing, and, as much as I hate to say it, the country will just continue with the same stagnation, shrouded by a frail, but somewhat tangible sense of peace.

For now, all I can do is keep looking for a way to flee with my brother and ensure that he lives a better life, with the ones that one day, perhaps, this country will shine once more.

Categories: Life in VenezuelaMemoirs of a Venezuelan Pariah
Tags: Venezuela 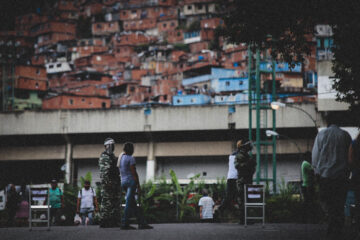 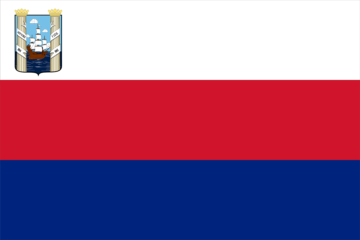 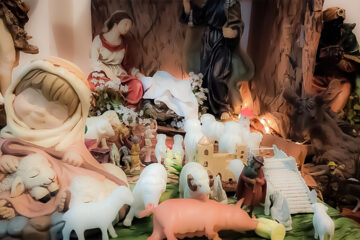