THE FIRST CHAPTER OF A CRIMSON DREAM LONG IN THE MAKING

Vaifen is under attack. Forces, both internal and external, actively conspire to bring an end to the peace of one of the last remaining nation-states in the planet Orbis.

The Ashen Reckoning, a terrorist organization hellbent on unraveling Vaifen and it’s ways, has unleashed a series of heinous and atrocious attacks upon the battered nation and its capital, the crown city of Ternion. Led by a man only known to the world as ‘Dogma’, the Ashen Reckoning seeks to ‘free’ Vaifen’s people from what they profess is, the tyrannical rule of the Crown, the corruption of the Senate, and the blind indifference of the Tribunal.

In addition to that, the nation finds itself at the cusp of a political crisis. Senator Thomas Easton, of the New Vaifen Front, covets the position of Prime Minister; armed with a silver tongue and a message of revolution and change for Vaifen and its way of governance.

Vaifen’s security forces have been unsuccessful in putting an end to the Ashen Reckoning’s bloodshed, and corruption among these institutions is an ever-growing concern for the Nation’s regent, King Sulwyn Starsong. In light of that, Starsong has authorized the creation of Gestalt, a small elite group that can turn the tide against the Ashen Reckoning and any other extraordinary threats against the Nation.

Comprised of the finest sons and daughters of Vaifen, the small task force boasts bleeding edge technology unlike anything the nation has seen before. Gestalt is provided with exceptional operational liberties unlike the rest of the nation’s security apparatus.

Bastiel Isthal, a young Nasivern orphan and the King’s protégé, dreams of one day becoming a hero worthy of those that preceded him. He heeds the call of duty conveyed by his regent and joins the Gestalt team, donning the crimson red GT-BS105MC Nightingale battle suit, and wielding the doctrine and legacy of his ancestors.

Sword of the Nation follows the journey and exploits of Bastiel Isthal and the Gestalt team as they work together to put an end to the Ashen Reckoning and Dogma, all whilst Bastiel carves his own heroic path in a world that may never fully embrace him.

This book is but the first entry in this universe—the first step towards this crimson dream of mine. Sword is the first of a trilogy, which, along with Sins of the Nation, and Soul of the Nation, will comprise the first arc of this saga.

The latest posts and information regarding Sword of the Nation and it’s planned sequels.

This universe and its journey towards completion is a life dream for me. It is also my first foray into writing something of this caliber, so I’m very thrilled to share this experience with you all—the good and the bad, the triumphs, and the obstacles.

As it stands, I have finished work on Sword of the Nation’s third draft. This third iteration is the one that I aspire will go through all the steps towards publishing. There are several aspects and goals to be achieved before it gets published, but this is a rough progress chart of where things stand at the moment.

As I continue work on achieving the first chapter of this dream, you can check out Sword of the Nation’s second public preview. You can grab the copy by clicking on the image on the right.

The preview contains the Prologue and the first nine chapters (out of a planned twelve), going all the way up to the events of “Operation Midnight Rhapsody” in Chapter IX: Binaural Symphony.

Much like with the First Public Preview that I released in January 2020, I hope it gives you a good first look at the life of Bastiel Isthal, the Nation of Vaifen, the Crown of Starsong, and the Gestalt team, as they face the unrelenting wrath of the Ashen Reckoning and their leader, Dogma.

What you’re about to read has not been professionally edited yet, and as such, mistakes and grammatical errors will be found. While English isn’t my native language and this is my first rodeo of this type, it is polished to the best of my ability and deficient expertise, so please excuse any glaring mistakes you may find, I promise that they won’t be present in the final product.

Please direct all feedback and criticism (good or bad) through either my Twitter, Discord, or email (links at the bottom of this page). 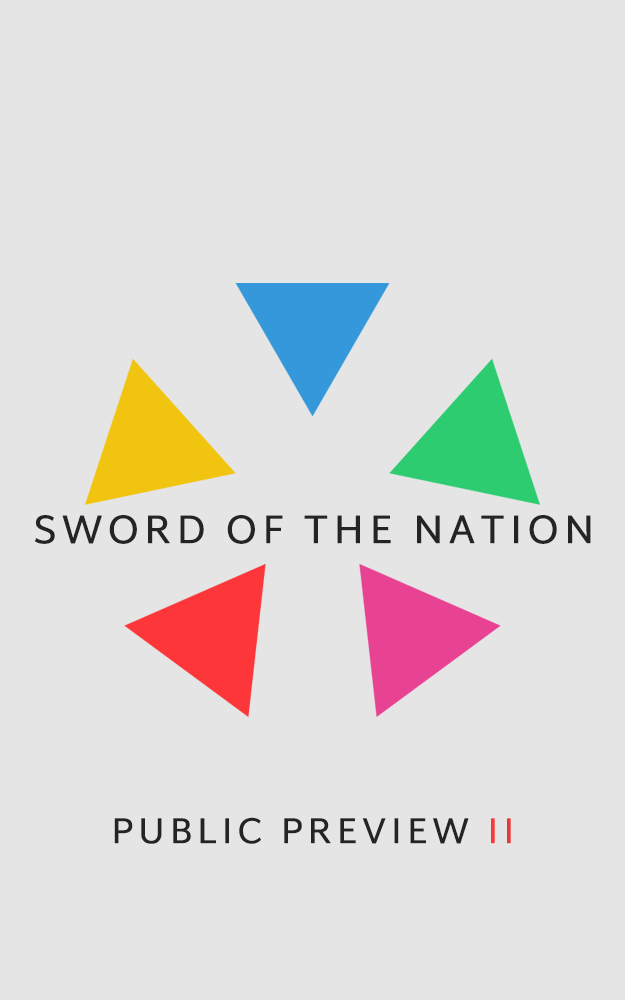 There are many characters, factions, and elements that give form to this universe.

The following are a preview of some (but not all) of the factions, its members, and concepts featured on Sword of the Nation, which will grow and evolve throughout Sword, Sins, Soul, and beyond.

The Royal House of Starsong

Heirs of Sin: The Nasivern

Any feedback, suggestion, criticism, or otherwise, will be greatly welcome, as it will be instrumental to the completion of this dream—and if you just want to chat that’s fine too!

Sword of the Nation is a work in progress, things are not set in stone and can be subject to change

All images, logos, and other graphics are placeholders during this phase of the project